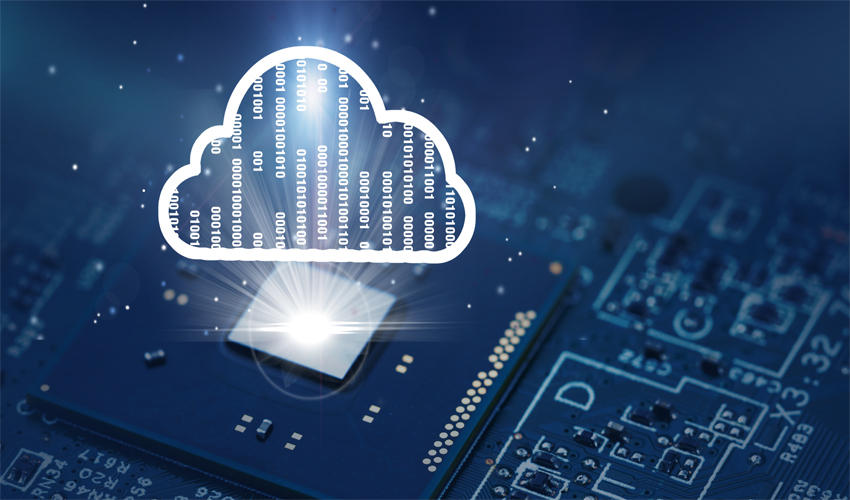 But we before starting with TR-069. Let’s go through the below terminologies.

ACS: Auto-Configuration Server. A network element in the broadband network architecture that supports auto-configuration of the CPE.

CPE: By Customer Premises Equipment, we mean any TR-069-operated device and therefore covers both managed internet Gateway Devices and managed LAN-side end devices as shown in the below diagram. All CPE regardless of type (bridge, router, Modems, gateways, set-top boxes, and VOIP phones for the end-users) use an IP address concept which is the layer-III concept to communicate with an ACS. Any customer premises equipment/device can only interact with a single server at a time.

Essentially, TR-069 particularizes communication between the Auto-Configuration Server, and ACS, and one or more CWMP end-points, normally located on devices in a BB user’s home network architecture. And this thing is achieved with a number of Remote Procedure Calls or RPCs which is explained in detail below.

Broadly there are two RPS methods defined. One for ACS and one for CPE. There are a few generic methods as well that are supported by both ACS and CPE.

Below is the RPC method for CPE.

And below are the RPC Method for ACS.

The below diagram clearly describes the core functions of TR-069. These are the core pillar of the management of TR-069. 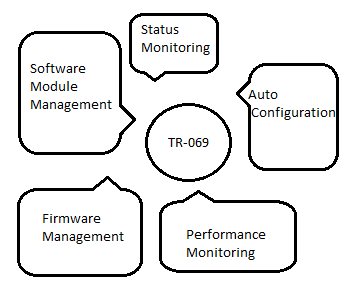 For TR-069, there are a lot of TR defined. The below diagram describes them all. These are the type of data that operates between ACS and server. There is a list of Models defined based on the TRS. 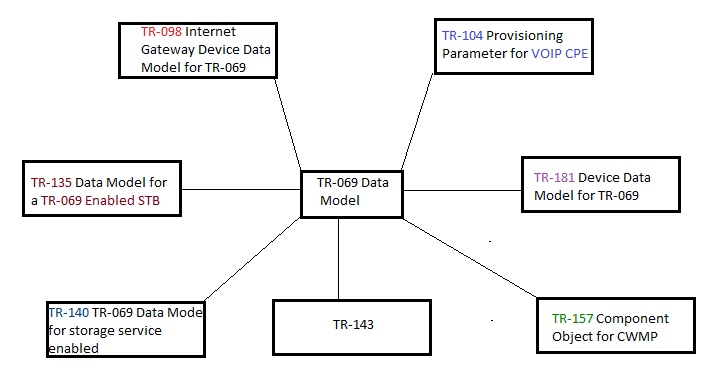 The first thing is the initiation and it all starts, when CPE initiates a TCP session with ACS and a secure connection is assigned for further communication. The session is initiated by CPE to send inform RPC messages that not only tell you the reason for session initiation. HTTP provides support for this communication.

In the HTTP Response, the ACS basically sends acknowledgment as an Inform Response. Which in other words is a response message for the received RPC message indicating the two-way communication.

The CPE will keep sending inform RPCs until the session starts. So to avoid any more RPC messages, the CPE sends an empty HTTP Post indicating that the session will start soon and be patient.  In response, ACS will send remote procedure calls to the CPE, like “GetParameterValues”.

The CPE will send the “GetParameterResponse” in response to ACS which contains the date it requested from CPE. To receive more RPC during the same session which was initially blocked by the ACS, ACS will send “SetParameterValues” to change CPE status. The session will end, once all RPC messages exchange is complete. ACS will send an “empty HTTP response”. Same as CPE sends “empty HTTP Post” to end the session.

For the latest Orfa Tech news and promotions.

OMCI Protocol and Its Relationship With GPON OLT

What is 5G CPE, Definition, Application, and Solution Scroll to top

This site uses cookies. By continuing to browse the site, you are agreeing to our use of cookies.

We may request cookies to be set on your device. We use cookies to let us know when you visit our websites, how you interact with us, to enrich your user experience, and to customize your relationship with our website.

Click on the different category headings to find out more. You can also change some of your preferences. Note that blocking some types of cookies may impact your experience on our websites and the services we are able to offer.

These cookies are strictly necessary to provide you with services available through our website and to use some of its features.

Because these cookies are strictly necessary to deliver the website, refuseing them will have impact how our site functions. You always can block or delete cookies by changing your browser settings and force blocking all cookies on this website. But this will always prompt you to accept/refuse cookies when revisiting our site.

We fully respect if you want to refuse cookies but to avoid asking you again and again kindly allow us to store a cookie for that. You are free to opt out any time or opt in for other cookies to get a better experience. If you refuse cookies we will remove all set cookies in our domain.

We provide you with a list of stored cookies on your computer in our domain so you can check what we stored. Due to security reasons we are not able to show or modify cookies from other domains. You can check these in your browser security settings.

We also use different external services like Google Webfonts, Google Maps, and external Video providers. Since these providers may collect personal data like your IP address we allow you to block them here. Please be aware that this might heavily reduce the functionality and appearance of our site. Changes will take effect once you reload the page.